Perfect unison in the pool. Scorching desire in the locker room.

It’s the opportunity of a lifetime for young Tyler Bourne to compete in Olympic synchronized diving with veteran Aiden Oxford. The last thing Tyler expects is to fall head over heels for his gorgeous partner, and he struggles to keep his attraction under control.

Polite but undeniably distant, Aiden keeps him at arm’s length, and Tyler feels like a disappointment to Aiden, who’d been favored to win gold with his disgraced former partner. Tyler knows his feelings are hopelessly one-sided and that the podium is likely out of reach. Yet as the Games begin, he learns nothing is certain until the final dive…

You are cordially invited to the Sin Bin wedding of the year—kilts required, undergarments optional.

Taine Afoa has faced opponents on the rugby pitch without an ounce of fear. He hopes to find the same courage when asking the love of his life to marry him. First, though, he has to ask Freddie’s fathers for their blessing.

If Taine survives, popping the question should be a breeze.

Freddie Whittle knows Taine has something up his sleeve. A yes forms on his lips before the question is even asked. But can they survive the madness of friends and family, all wanting to help plan their wedding?

As their May-December romance tumbles into happily ever after, one surprise after the other brings them more joy than they ever imagined possible.

The short story Haka Ever After is the seventh (and last) book in Dahlia Donovan’s international bestselling gay romance series, The Sin Bin. Each one features hot rugby players and the men who steal their hearts.

As a rhino shifter, Tromp knows that he’s not the sexiest beast in the world. In fact he’s clumsy and he can’t see very well, and that’s whether he’s in his human or animal form. Still, he enjoys going to the bar and watching the other shifters hooking up, especially the dancers. Then he sees a slinky kitty dancing on the little stage and he’s immediately smitten. He knows a sexy beauty like that would never go for him, but he’s happy just to watch and fantasize about what could be.

For his part, panther shifter Pepper might be gorgeous on the outside, but he knows most people see him as nothing more than a piece of meat and he’s had a hard past. There’s something in the way the big rhino shifter looks at him while he dances, though, that makes him feel special. So when his stint on the stage is over, he heads right to the rhino’s table.

Can Tromp and Pepper ignore the world’s expectations and find what they need in each other? 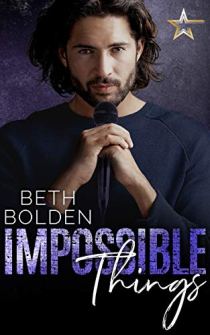 For the last ten years, Benji and Diego have not only been members of Star Shadow, one of the biggest boy bands in the world, but best friends. During the years of fame and fortune they’ve also held a front row seat to the callous cruelty of the music industry. As much as they’ve both wanted more from their relationship, it never felt worth it to trade what they have for something hot, heady and completely impossible.

But is it really?

After welcoming back their long lost member and making it through their reunion tour with a new lease on fame, life suddenly seems too short to continue settling for safety.

Benji and Diego could have everything they’ve ever wanted, but can they figure out how to choose each other? Despite every impossible thing the world intends to throw at them?

Impossible Things is the second book in the Star Shadow series and should be read in order.