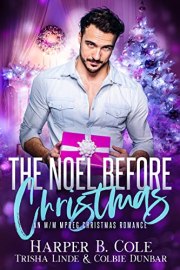 All he wants for Christmas is a family…

Alpha wolf shifter Noel has always hated Christmas. Everyone just assumes he’ll be festive to the max, with a name like his, but it couldn’t be further from the truth. He can’t help but associate this time of year with sadness and loss, and he’d much rather just hibernate for the entire month of December. The irony isn’t lost on him, however, when he finds himself wearing a bright red suit, chanting ho, ho, ho.

Omega fae Calen loves this time of year. The lights, the tinsel, the overall joy–it fills him to bursting with Christmas spirit. This is the exact reason why he’s always first in line amongst his coworkers at the department store to volunteer to work at Santa’s Workshop.

The two find themselves working together, and while their personalities clash, Noel can’t help but feel himself being drawn to Calen. Will the grumpy alpha find a way to change his mind about the holiday season? It would be a Christmas miracle.

Harper B. Cole, Colbie Dunbar, and Trisha Linde bring you The Noel Before Christmas, a feel-good MM Mpreg Christmas romance. The novel features an alpha wolf shifter who not only thinks Christmas is overrated but actively ignores it each year, an omega fae who so loves Christmas he listens to carols year-round, a couple who approach life and the holiday season from different sides,a workplace where their attraction can’t be ignored,an unexpected pregnancy, an adorable baby, and a tinsel-covered HEA. If you love stories where opposites attract, grab your copy today.

Someone’s waiting for Eli. Somebody’s watching his every move…

Eli is used to looking after himself. Single for longer than he’d care to admit, he doesn’t need a man for more than a hookup, not when he’s got his loyal dog, Zeus, by his side.

But one night changes the course of his life. He meets Dominic, an actual copper and not the stripper he thought his best friend had hired for his birthday. A copper that has relationship written all over him and Eli set in his sights.

After his night out celebrating, another gift awaits him at home—but not a pleasant one. His birthday may be over, but the threats keep coming. Keep escalating. Keep hurting those close to him. Just how far will the monster behind them go? And how much will Eli lose before he can stop them?

A M/M holiday romance novella about finding your way home.

Rhett Carpenter’s early fame ended with a crash. Sixteen years later, he’s working steadily: writing, producing, narrating, even acting. He’s made a decent life for himself. The trouble is, he never wanted a life that was only for himself, and he’s not sure he wants this one anymore.

Gabriel Aguilar didn’t know who Rhett was when they met on the train, but it didn’t take long to find out. They noticed each other around the neighborhood, as well as on the Metro. Months later, when Gabriel’s apartment burned down, Rhett offered the vacant studio behind his house.

They weren’t close, but they were friends. So when Rhett needed someone to reach out, Gabriel did. And before long, they were much more than friends. 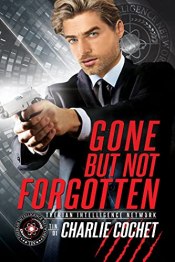 Codename: Chaos.
Former THIRDS agent turned TIN operative Dexter J. Daley is a legend. Just ask him, he’ll tell you. Chaos isn’t so much a codename as it is Dex’s state of being. As a spy for the Therian Intelligence Network, Dex has spent the last four years bringing down the bad guys. Hell, his middle name is literally Justice. But a new mission brings him face-to-face with a different kind of monster, one with a weapon that can alter the course of history. Failure is not an option, but as the mission goes from dangerous to deadly, Dex finds himself up against a far more terrifying force, and this time, there’s no escape.

Codename: Atlas
As former team leader for Destructive Delta and now a TIN operative, Sloane Daley knows what it feels like to carry the weight of the world on his shoulders. But no matter the challenge, Sloane knows that together, he and his husband, Dex, can overcome anything. When their latest mission takes a personal turn, Sloane is forced to confront the very thing that created him. Looking back to a past he thought he’d left behind is the least of Sloane’s problems, because the greatest threat he’s about to encounter… is his own husband.

Two weeks in paradise, one mystery sexter, and some sexy yoga times … but real life isn’t all rosy sunsets and walks along the beach.