The student…
If he wants a job when he finishes grad school, Tanner Brown needs to get a foot in the door. But when he arrives at the country’s largest statistics conference to find he has nowhere to stay, he’s not sure it’s worth it. Especially when he realizes his hot faculty crush just witnessed his embarrassment from a front row seat.

The professor…
Dr. Beckett James is happily focused on his career until one of his former students slides into his line of sight. Tanner is brilliant and engaging, and when he ends up without a room, Beckett has no choice but to offer him a place to stay for the weekend. Even if it means testing his restraint.

The problem…
When their conference fling turns into an on-campus complication, Tanner and Beckett will have to control the variables that threaten to keep them apart or risk losing their chance at a happy ending before it’s even begun.

A Foot in the Door is the third full-length novel in the Open Doors series featuring a statistics professor who makes a mean curry, a ginger-haired student with a bright future, and an offer neither can refuse. 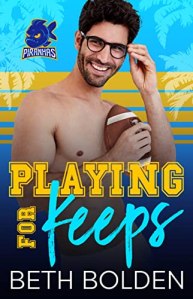 Sebastian Howard is the best damn cornerback in the NFL.

Or at least he was.

Age and injuries have taken a toll, and while most people have written him off, Sebastian isn’t ready to acknowledge that at only thirty-two, he’s already in the twilight of his career.

He signs with the Miami Piranhas intending to prove everyone wrong.

Only to realize that the head coach’s son, out-and-proud Beau Dawson, doesn’t believe he can.

Beau is infuriating but brilliant, and when he offers to help him on the field, Sebastian wants to say yes, but there’s one thing stopping him: the unexpected, inconvenient, and all-consuming crush he doesn’t want to have on Beau.

But Beau isn’t interested in playing it safe, with football or with anything else, and soon they’re embroiled in a hot—and secret—affair that would finish Sebastian’s career if Coach Dawson found out.

As Sebastian falls harder for Beau, he begins to realize that actually the worst thing in the world isn’t getting benched, but losing the man he loves.

I’ve been hiding who I am for so long I’ve forgotten what it’s like to be myself. – Hunter

Two years ago, I retired from the army and started my life as a civilian. I have a job I love, friends who are my family, and more secrets than I can count. I might not be a soldier anymore, but I can’t seem to let the past go. It haunts me, and has made it impossible for me to truly be who I am.

Then Shane is hired by my company and we’re teamed up to work on a project. He’s young, handsome, and he has a knack for making me forget who I’m supposed to be. I’ve never let anyone see my true desires, but Shane makes me want to let go and finally let someone in. To let him take care of me the way I’ve always craved.

As much as I want to fight it, I can’t say no when he shows me who’s boss.

Battle to Surrender is a 75k word opposites attract, grumpy/sunshine, hurt/comfort story featuring a retired soldier suffering from PTSD, his sweet but firm younger co-worker, a size difference, a found family, and all the feels. It is Book 3 in the Heroes at Home series but can be read as a standalone.