Tristan threatens to throw him way off course, and falling for the hot straight soldier is definitely not in his plans. But as tensions rise and the truth about Jake is revealed, will Lane’s heart follow orders or will all be lost like grains of sand swept away in the desert? 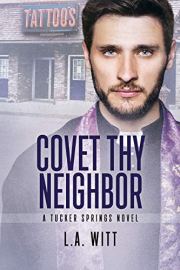 Tattoo artist Seth Wheeler thinks he’s struck gold when Darren Romero rents the apartment across the hall. The new guy is gorgeous, witty, and single, plus he’s just the right amount of bold and flirtatious. Perfect.

Well, except for the part where he moved to Tucker Springs to take a job as the youth pastor at the New Light Church. While this hardcore atheist enjoys a hearty debate, Seth’s painful past has led him to avoid believers—not out of judgment but out of self-preservation.

Darren is everything Seth wants in a man except for that one massive detail that’s impossible to overlook.

But is Darren’s religion the real problem? Or is it just a convenient smokescreen to keep Seth from facing a deeper fear?

Seth needs to figure it out soon, because while Darren may be a patient man, he won’t wait around for eternity.

This previously published book is #4 in the Tucker Springs series, and can be read as a standalone.

From #1 NYT Bestseller Lauren Blakely comes a sexy, forbidden MM romance novella about a rock star and a bodyguard!

There’s one thing I need in my life right now and one thing only — a new job.
So I’m stoked when I land a dream gig as a bodyguard for a rock star.
But there’s definitely one thing I do not need at all — a complication.
Like being wildly attracted to the guy who just hired me.
So I vow to do everything I can to deny the intense attraction for the man I’m sworn to protect.
All I have to do is ignore it. Eventually it’ll go away, right?
But that’s not what happens one night after a concert…

A sleepy little town doesn’t know what, or whom, is about to hit it when Ked, Kaden Edmond Donegal, comes to live.

Hyper and determined, Ked longs to be a great forest ranger, taking care of the land, watching over it like its protector. What he didn’t count on is falling in love with the people there nearly as much as the land, and one in particular that doesn’t give him the time of day.

Sean Ashby moved to Bear Lake to hide away from the world after he nearly died while serving in the army. A local artist, he makes his living bringing pieces of wood to life with stories of their own. When he sees Ked, he sees someone who needs tamed, but he doesn’t feel as if he’s up to the job.

Not giving up on the bearded ginger bear, Ked does everything he can to get in the way of the man, and he finally gets what he wants. Or, at least, what he thought he wanted. Sean is a dominant who needs a submissive, and Ked never thought of himself that way. With Ked’s rambling voice hushed and his hyper movements slowed, Sean leads him into a new life he didn’t realize he needs so badly.

The townspeople take him in as family, a man loves him unconditionally, and poachers are in need of catching. Is Ked up for his new life? Can he be a part of a community that is quirky and quiet, or will his own quirks and rarely silent voice make him permanently an outsider?