His life may be falling apart but he’s not looking for someone to fix it.

Slade’s not at rock bottom but he’s close. His band split up, his bank account is empty, and his best friend went and fell in love.

As soon as Jack saunters up behind him, Slade’s immediately on edge. Jack is fancy suits and expensive whiskey, while Slade is dive bars and cheap beer. Besides, why would someone who owns a kink club be interested in a wreck like him?

Slade doesn’t want to crave Jack, yet he can’t bring himself to disobey his demands. He knows Jack can give him rewards he never dreamed of…

Jack might be in charge, but it’s Slade who holds the power. In order to get what he needs, he’ll have to accept Jack’s help.

Note: Rules to Live By is a dual-POV book featuring a brat who’s not used to following the rules and a workaholic businessman who may be too committed to the success of his unique kink club. The Lodge series will follow the growing popularity of this club as well as the men who make it run. 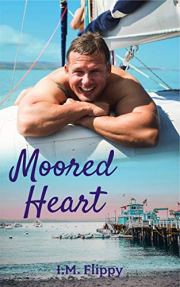 When retired homicide detective Jason Winters moves to Catalina Island fresh off a divorce, he’s ready to start a new life.
Jason’s plan is simple: hang out on his small yacht, work on his book, and get his dick wet once in a while. There are plenty of hot women on the beach to choose from.

There are also a lot of men throwing him winks and calling him “daddy.”

Jason can’t deny he’s thought about men, but that attraction is something he’s never had to confront before… until he meets Charlie.

Charlie is gorgeous and more than that, he makes Jason laugh. He’s also smart and genuinely kind.

Jason feels a zing around him he hasn’t felt in years.

Charlie Benton likes his life. Sure, he works in a tourist trap shop, lives with his mom, and rarely bothers to leave tiny Catalina Island. But he’s got friends, he loves his town, and hot guys come in on boats all the time. Tourists always want to bang a cute townie.

Charlie did not expect true love to come in the form of Jason Winters.

So much for the great gay romance.

The last thing Charlie needs in his life is to get his heart broken by a straight guy.

After licking his wounds from a painful relationship, Tate Sullivan is ready to move back home. He picks up where he left off as drag queen extraordinaire Frieda Love in a West Village bar in New York City. He doesn’t expect to be drawn to the mysterious man with the dark eyes who shows up to every single performance – flirtatiously eyeing Tate one second and disappearing on him the next. Why mess around with a guy who is clearly giving him mixed signals?

Sebastian Clark is on a mission the first night he shows up at Ruby Redd’s. He doesn’t anticipate his plan being flipped on its head by the charismatic drag queen and even more so by the mesmerizing man beneath the makeup. But the more he learns about the vibrant and brash Tate Sullivan the more intrigued he becomes. So he pushes aside his guilt about why he sought out the bar in the first place in order to get to know the guy behind the stilettos. 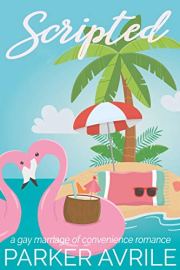 Lifelong friends Noah and Brenner are determined to make it to the top in Hollywood. When they learn the new reality TV show only accepts married couples, wedding bells are in their future.

Brenner can’t shoot for second place. Only the top prize pays enough to cover his mother’s medical bills. He can’t be choosy about the roles he accepts– and he can’t tell anyone how tough it is to play the happy hubby of the guy he’s had a crush on for years.

Noah has screwed up on social media one time too many. Playing Brenner’s husband on the new show might be the only way to cash in on his bad boy image. Trouble is, he has a secret– and he doesn’t know how long he can keep it from Brenner when they’re sharing the same bed.

“Scripted” is a full-length standalone 60,000 word contemporary gay romance novel with NO cheating, NO cliffhangers, and a guaranteed Happily Ever After. Expect a tropical island where clothes mysteriously disappear, best friends are destined to become lovers, and somebody is determined to hog all the cupcakes.