The ocean isn’t ready to let go of him yet.

Erik Hash, owner of a shark diving company in South Africa, loses everything in one night–his business, his partner, and his desire to live. The victim of a violent hate crime, he leaves South Africa and takes a job aboard a private yacht to escape.

When his partner reappears after three years, he wonders if there is something left for them to rebuild. But the ocean isn’t ready to let go of him quite yet. 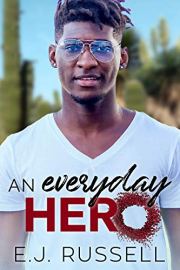 A different kind of home invasion…

When Adam Tyler’s sister announced she was pregnant, Adam decided to move from Portland, Oregon, to Phoenix, Arizona, to fully embrace the uncle experience. However, he didn’t count on the move being delayed until three days before Christmas–and three days before his sister’s due date. And he definitely didn’t count on finding a scorpion in his bedroom. Cue the panicked calls to exterminators.

A different kind of knight to the rescue…

Garrett Strong doesn’t consider himself at all remarkable–his ex certainly didn’t think so–and Garrett’s pest-control business is circling the drain. Although Adam is his first new client in months, that isn’t the only reason Garrett goes above and beyond for him. He feels a real connection to the younger man and intends to do everything in his power to make sure Adam feels safe and welcome in Phoenix–venomous intruders notwithstanding.

An Everyday Hero is a short and sweet opposites-attract, age-gap rom-com featuring a fish-out-of-water geek (who still manages to get a bit soggy), a stand-up blue-collar guy (who can’t see his own worth), unexpected additions to the holiday festivities (some less welcome than others), and more than one serious discussion about the true meaning of the word hero.

Where does a princess go for advice? In the kingdom of Rosewood, the answer’s simple: ask the honey witch.

Ursula has grown up knowing she’ll inherit the throne, and she’s devoted to her land and her people. But she wonders about her future, whether she’ll be happy, and whether she’ll marry for love. Beautiful earth-witch Esmerelda promises answers, divined in magical honey … and one smile from her has always made Ursula’s heart race.

Esme has loved Ursula silently for years, despite knowing a common earth-witch can’t hope to marry a princess, especially one so generous and passionate and worthy of a royal marriage. But when Ursula comes to her with a question about love, Esme can’t resist introducing her princess to the sweetest magic of desire … and some even sweeter uses for enchanted honey.

The only thing more dangerous than their chemistry…is their enemies!

Mild-mannered Xenoarcheologist Dr. Alec Coimheed and his best friend, Dr. Clemy Armistead, are certain that they’ve just found the ancient location of an apocryphal battle between demons and angels. Whisked away on a rollicking adventure, Alec finds himself under the watchful eye of Rafe, a taciturn mountain of a man with a mysterious past.

Working with the enigmatic Praesidium, which claims to have protected humanity for generations, Alec clashes with his ethereally handsome bodyguard. As the New Watchers pursue the rambunctious pair across the globe, Alec and Rafe will have to battle ancient terrors and mythical creatures come to life. Racing to the ancient tomb of a fallen angel, Alec and Rafe may lose it all – and each other – to save the world.

The Watchers: In The Valleys Of The Earth is the first book in an MM paranormal romance series.

Can he ever learn to trust again?

An epic motion picture! A gay Napoleonic War love story! Ballrooms & battles at sea! Romantic happy endings on the silver screen! And a film that’ll change everything for its stars ...