DEAN: I’m under his protection, but I want to be under him.

I’ve inherited millions, but I’m not touching a dime. I was never close to my wealthy stepdad, so I won’t tap into that massive inheritance until I’ve earned it. But I’ve got an enemy, and he refuses to let me live a quiet life.

I need a bodyguard, and Beckett is more than qualified. He moves like lightning and strikes just as hard. And that smoldering look he gives me? It’s downright electrifying. Laying low in Manhattan suddenly doesn’t sound so bad.

But my rival has it out for me, and he won’t stop. I’m in Beckett’s care now, and as the heat turns up, I’ll be turning to him for relief.

My money won’t protect me, but Beckett will.

BECKETT: He’s mine to guard and mine to keep.

Being assigned to a celebrity’s millionaire stepson isn’t a dream job, but Dean isn’t what I expected. He’s smart, unpretentious, and thoroughly sexy. Now I’m his live-in bodyguard, and whoever wants to harm him will have to go through me.

The only person I can’t protect him from is myself. When Dean wants to see the man under the uniform, the clothes start coming off. I’ll show him just how qualified I am to handle this body.

His enemies are cranking up the pressure, but Dean’s in my care now. Whoever has it out for him won’t even get close—not as long as I’m covering his back.

I can protect him, but not if we’re both falling.

This is the third book in the Hightower Heat series. It can be enjoyed as a standalone with no cliffhanger. Readers can expect an extra spicy MM romance with several steamy scenes. Heat level: 10.

Jimmy and Marc make an adorable couple. Jimmy’s kindness and clean-cut cuteness radiate out of him like light. Marc, although a bit older, complements Jimmy with his humor and his openness to love.

But between them, a dark secret lurks, one with the power to destroy.

See, when Marc believes he’s meeting Jimmy for the first time in the diner where he works, he’s wrong.

Marc has no recollection of their original encounter because the wholesome Jimmy of today couldn’t be more different than he was two years ago. Back then, Jimmy sported multiple piercings, long bleached dreadlocks, and facial hair. He was painfully skinny—and a meth addict. The drug transformed him into a different person—a lying, conniving thief who robbed Mark blind during their one-night stand.

Marc doesn’t associate the memory of a hookup gone horribly wrong with this fresh-faced, smiling twentysomething… but Jimmy knows. As they begin a dance of love and attraction, will Jimmy be brave enough to reveal the truth? And if he does, will Marc be able to forgive him? Can he see Jimmy for the man he is now and not the addict he was? The answers will depend on whether true love holds enough light to shine through the darkness of past mistakes.

Skin to skin contact is illegal. Sex? A felony. Insulated suits and gloves keep people from even the most platonic touches. Citizens line up in droves at simhouses for their rationed, prescribed orgasms in virtual reality machines.

Keith Borden has worked in a simhouse for years, and he’s never been tempted to break the strict no-contact laws… until Aiden Maxwell comes along. The attractive and dangerously flirtatious patient invites him into the seedy underground where people engage in real, wireless sex. Though Keith stands to lose his career and his freedom, he’s curious and Aiden is irresistible.

From the moment he sets foot in the wireless lounge, Keith is in a world of flesh and fantasy. He’s hooked. On the sex, on the atmosphere, and most of all, on Aiden. Years of keeping everyone in his world at arm’s length have left Keith craving a human touch, and Aiden offers all the contact—scorching sex, gentle affection, and everything in between—Keith can handle.

That is, until an unexpected act of betrayal throws Keith’s world into chaos, and he finds himself more alone than he ever imagined possible…

Justin Molina has secrets. He’s served his time but remains a prisoner of his past, unable to forgive himself for failing his family when they needed him most. Justin’s grief is overwhelming, but he keeps silent and focuses on his goals. About to graduate college, he tries to keep his head above water—no matter how many times life keeps knocking him down. When he’s forced to register for a poetry-writing class, Justin discovers putting words to his feelings might be exactly what his fractured heart needs to heal. Or is it the older professor with the bow ties and gentle smile who gives him a chance when no one else will?

Professor Foster Faraday Harding is a broken man. His divorce is final, and he’s reverted back to the safety of his books. Even his poetry no longer brings him joy; he’s sleepwalking through life. The raw emotion of Justin’s poetry awakens Foster to desires he thought long buried in the ashes of his marriage. When he discovers Justin is struggling financially, Foster offers him a solution that benefits both of them. Soon it’s Foster who’s struggling with emotions he can’t understand: Justin is his student. And a man. One crazy night years earlier doesn’t mean anything. Foster is straight.

After months of denying the growing attraction between them, an unexpected kiss changes everything. Justin and Foster are no longer only professor and student—they’ve become lovers, but the strain of hiding their relationship increases with each passing day. Words have the power not only to hurt but to heal the greatest pain. If Foster and Justin listen to what their hearts are saying, they might break through their silence and live their own love poems—together. 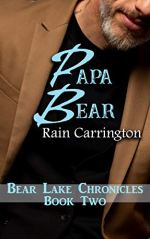