A young cowhand with an uncertain future, drowning in debt. A wealthy rancher with a mysterious past, drowning in booze. A single chance at happiness in the face of impossible odds.

Jace has been in the closet ever since he first realized he was gay. Not only is his personal life a mess, but now, hard on the heels of losing his mother to cancer, he’s about to lose their farm to the bank. An unexpected job offer from complete strangers could be his only opportunity to save it.

After betrayal and addiction stole away everything Remy ever cared about, he figured that managing a promising desert reclamation project in bum-fuck Nevada and drinking himself to sleep every night was about the best he could hope for out of life. He never expected to fall for a clean-cut cowboy with a cartload of horse savvy and a giant chip on his shoulder.

Too bad one of them is a broken-down wreck, and the other has the closet door locked so tight that he may never see the light of day. Because if there’s one thing Remy has never believed in, it’s fairytale endings.

Though there are other books in the Love in the Desert series, Diamond Bar Alpha Ranch is a standalone HEA gay romance novel with no cliffhanger. It contains explicit sex scenes, as well as hot cowboys with issues—which is probably why you’re here in the first place. (No cattle, horses, or hot cowboys were harmed during the making of this novel.)

Be mine… just for tonight.

That pretty much sums up my relationship motto. I’m a busy air marshal with no time for love. Plus, I don’t do commitment, just hook ups. I like to dominate men in bed and then fly off around the world to my next conquest.

Until one day I’m on a flight that experiences a viral outbreak. The flight attendant, Miles, is so damn hot while we work together to rescue passengers. If we make it out alive, I think we should get together.But just a for a f*ck. I never do more than that. So why can’t I stop thinking about him?

Did I get hit with a different kind of bug on the plane… one that makes me fall hopelessly in love with a handsome, sweet, loyal guy?

When I upset him due to my inability to trust anyone and he won’t talk to me, I find myself flying to what seems like the ends of the earth- his small hometown of Baytown, where he went for a wedding and to meet up with his high school friends- to make things right.

The whole way there, I keep wondering whether he’ll be able to forgive me so that I can get back in his pants. Or is he already in my heart and head so much that this will change everything?

He’s making me reconsider how I normally do things. But I can’t let him know the secrets from my past that have haunted my relationship decisions.

This is nothing that serious, right?
Or is love still in the air? 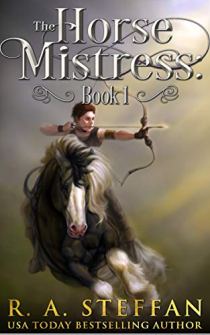 **Book One of the 2016 Rainbow Award winning poly romance series**

Carivel’s secret could save her people. It will also destroy her life.

She was born female, but she has been secretly living as a boy for years in her adoptive village of Draebard, doing a job the elders insist can only be done by a male. The last thing she needs is to fall for not one, but two unattainable men—a fierce warrior and a reluctant wolf-shifter with a horrific past. Now, the Alyrion Empire is poised to invade, and Carivel must choose whether to keep her secret or reveal it—not only to the men she loves, but also to the powerful female ruler whose army could help protect Draebard during the coming war.

Perfect for open-minded fans of ménage and reverse harem romance, The Horse Mistress: Book 1 by USA Today bestselling author R. A. Steffan combines detailed world-building, and a heartfelt romance between three noble, damaged people who have no one to turn to but each other.

Author’s note: This book contains sex. The sex is not vanilla. Some of it is between two men who love each other. If any of those three facts made you go “Eww,” please do the author a solid and don’t download this book.