Ronan Collins has spent most of his life in Dublin hiding who he really is. Coming out would hurt his mother, and Ronan isn’t going to be the second gay man to do that. When he receives news the father he has never known has died, leaving him both a house and a business in Amsterdam, he jumps on the opportunity to get to know the man who fathered him and to discover what he’s been denying himself for years.

Lucas Brandt thought he had it all when Paul Kelly offered him a job and rooms to live in. With Paul deceased he fears he may be about to lose both. He didn’t even know Paul had a son, and now this stranger is on his way from Dublin to pull the rug out from under Lucas’s feet.

The two men don’t expect to like each other, never mind feel attraction. With numerous reasons why hooking up would be a bad idea, why does giving in feel so much better? And is Ronan’s back story really as he’s always imagined it to be?

Sudden changes require great bravery. Can both men find the courage to be true to themselves and each other? 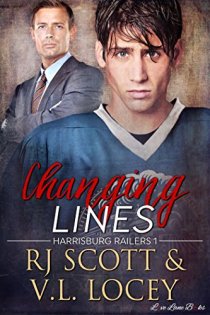 Can Tennant show Jared that age is just a number, and that love is all that matters?

The Rowe Brothers are famous hockey hotshots, but as the youngest of the trio, Tennant has always had to play against his brothers’ reputations. To get out of their shadows, and against their advice, he accepts a trade to the Harrisburg Railers, where he runs into Jared Madsen. Mads is an old family friend and his brother’s one-time teammate. Mads is Tennant’s new coach. And Mads is the sexiest thing he’s ever laid eyes on.

Jared Madsen’s hockey career was cut short by a fault in his heart, but coaching keeps him close to the game. When Ten is traded to the team, his carefully organized world is thrown into chaos. Nine years his junior and his best friend’s brother, he knows Ten is strictly off-limits, but as soon as he sees Ten’s moves, on and off the ice, he knows that his heart could get him into trouble again.

Life in a small mining town can be like living in a fishbowl, where everyone knows everybody else’s business. Fifteen-year-old Jodi’s mother wants her father to quit his binge drinking and his dangerous job at the mine—even more so after a collapse leaves two miners dead and three trapped deep underground.

As tensions escalate both at home and around the town, Jodi seeks comfort with her friends but soon faces a double betrayal. Meanwhile, her ten-year-old brother Jake reacts by joining a gang of schoolyard bullies who engage in increasingly dangerous antics.

As Jodi struggles to gain autonomy over her life, she begins to discover the person she really is. But with everything around her spiraling out of control, it may not be the right time to let her family, friends, and ultimately the whole town know—no matter how much she wants to.