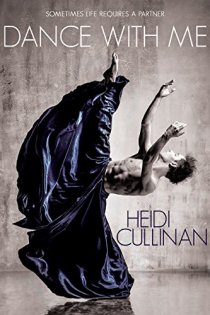 Ed Maurer has bounced back, more or less, from the neck injury that permanently benched his semipro football career. He hates his soul-killing office job, but he loves volunteering at a local community center. The only fly in his ointment is the dance instructor, Laurie Parker, who can’t seem to stay out of his way.

Laurie was once one of the most celebrated ballet dancers in the world, but now he volunteers at Halcyon Center to avoid his society mother’s machinations. It would be a perfect escape, except for the oaf of a football player cutting him glares from across the room.

When Laurie has a ballroom dancing emergency and Ed stands in as his partner, their perceptions of each other turn upside down. Dancing leads to friendship, being friends leads to becoming lovers, but most important of all, their partnership shows them how to heal the pain of their pasts. Because with every turn across the floor, Ed and Laurie realize the only escape from their personal demons is to keep dancing—together.

This novel has been previously published and has been revised from its original release.

Some skeletons are better left in the closet.

Steven Sharpe is on the road to recovery. After boozing, drugging, and sex with just about anything that moved, he’s making a comeback. Age is only a number, right? Why should he hang up his mic and guitar at thirty-seven when hard rock music needs a shot in the arm? And with his powerful voice, Steven figures he’ll have no problem regaining the adulation he once embraced as the lead singer of StarHaze.

Despite all the crazy, fun times from back in the day, one night will forever be emblazoned in his mind—the moment he fucked up his chance at love.

Driven and determined, Noah James is quickly climbing the corporate ladder. At twenty-eight, he’s been promoted to junior partner and has finally gained his peer respect. Though Noah still gets crap for being a gay black man, he doesn’t allow that to deter him from fulfilling his goal of being the only James man graduate college and build a successful career. But the past has a way of sneaking up when he least expects it and biting him in the ass.

Ten years ago, Noah and Steven were strangers at a run-down bar with their only connection being a song. When they’re thrown together again by chance, neither of them is prepared for the roller coaster of emotions they can no longer deny. Now, the two men must face the truth that while love is a fierce emotion, so is fear.

With her own dancing career unfortunately behind her, Mish has taken the role of assistant director at a prestigious ballet company in New York City. Her path to success in the dance world appears clear until she begins to fall for 20-year-old protege Dinah, a rising star in the dance company, a young woman who is as naive as she is beautiful.

Against Mish’s own better judgment, she’s unable to stop herself from becoming romantically involved with the young ballerina. But when another dancer, envious of Dinah’s success and Mish’s involvement with her, hatches a plan to take over a lead role in the company’s current production, Mish sees the career she’s built begin to crumble into jealousy and threats of extortion.

Will Mish be able to navigate the politics of the theatre and salvage her future in the ballet? Or will her romantic feelings for Dinah cause her to give up everything she has worked for?