Title: The Journalist and the Dancer

Christopher, a quiet, reserved, British journalist, reviews restaurants and night clubs in Ibiza. After a painful breakup and nervous breakdown in the UK, he aims to live a more spiritual possession-free life on the Mediterranean island.

Lucas flees an abusive ex in Madrid to live his dream of dancing in Ibiza’s large prestigious night clubs.

They meet at a night club and both feel an instant attraction which soon develops into an emotional connection neither of them feels ready for.

Sharing their painful pasts with each other brings them closer together, though neither of them planned on being in a proper relationship. But when a family crisis pulls Lucas back to Madrid and a painful encounter with his abusive ex, Christopher deals with painful experiences of his own.

The Journalist and the Dancer
Liam Livings © 2018
All Rights Reserved

Chapter One
“What are you drinking?” the barman asked. He wore a low v-neck sleeveless T-shirt and looked far too skimpily dressed for what was purporting to be another straight bar.

“Gin and tonic. Large.” Christopher winked—it was always worth a try wherever he was, and Ibiza’s bars were very mixed anyway. Straights and gays shared most drinking establishments happily. A relationship of equals, was that too much to want?

He checked the invite, scanning down for anything unusual. Among the rubbish about it being the new place to be seen on the island and where all the it people hung out, whoever they were—Christopher had lived on Ibiza for a year or so and had yet to meet these so-called it people—were pictures of men and women laughing and drinking together, so probably aiming for the straight crowd.

“Excuse me. We’ve run out of soda water. Can I get you something else?” The barman shook the hose contraption and shrugged.

“Surprise me.” Because nothing else here is surprising. The red walls were covered in likenesses of the island’s shape, with large white skulls painted on either end, and the dark corners of the club were filled with silver chairs and tables. The latest Eurotrash track boomed from the stage on the far side of the room. Christopher stifled a yawn. Somehow, this wasn’t quite what he’d imagined looking for a less materialistic life would be like.

But he still had to eat.

The barman slid a tall, multicoloured cocktail adorned with a blue umbrella and red cherry along the bar. “Surprise!”

Christopher took a sip and was pleasantly shocked that he enjoyed the bitter sweetness. “When is the actual opening happening?”

“Eight, eight thirty.” The barman talked enthusiastically about the cannons, which were going to spurt white foam over the revellers on the dance floor.

“Foam cannons? Really?” I think the year 2000 called and it wants its nightclub back. Christopher rolled his eyes behind the tall cocktail glass.

“It’s not a club here without one—apparently.” The barman shrugged and his biceps rippled in the light. “Mind you, have you seen the cages hanging above the dance floor?”

The barman pointed through an archway to the source of the pulsing noise that passed as music here.

Bit tacky. How can I say it’s a bit tacky without actually saying it’s a bit tacky? How about fanciful? Or maybe enthusiastic? Christopher pondered the right words for a few moments.

The barman left to serve another customer, tiny white shorts about two sizes too small encased his tight arse cheeks—definitely a good seven or an eight—wiggling as he walked.

Christopher contemplated what a waste that arse was on a straight man, then pulled a white wafer-thin laptop from his bag and began writing his Ibiza Discovered review for yet another nightclub opening. If I ask the barman a few more questions, that, and a few words about the ambiance—always deathly dull at these things—I’ll be done and home to chill out with the TV and Sally within the hour. Maybe that’s why I’m still single. Or maybe it’s because I don’t think I’ll ever find a man who’s equal to me…

“The VIP area is ready when you are.” A slight man in a black suit with sweat on his brow appeared at Christopher’s shoulder.

With a sinking feeling that his leaving within the hour plan was looking less likely now, he followed the man to an area with a red velvet rope and clipboard-checking woman who flicked her long brown hair more often than she checked the guest list.

Christopher gave his name, waited as the woman checked it and was then shown to a table with other people talking and toasting with champagne.

People. And they’re talking. They’re going to want to talk to me and want to know who I…Damn!

“Who are you reviewing for?” a man at the table asked.

“Ibiza Discovered.” Different people asking the same questions, probably going to suggest the same bloody drinking game as the evening progressed. Being this standoffish was definitely not improving his chances of finding a date any time soon, he realised.

After introductions around the table—a few local papers, a website mag, and a clubbing scene mag—Christopher gritted his teeth as the first man suggested they play a drinking game, based on how many times the manager said certain words in his welcome address.

He checked his watch. With no sign of the manager announcing the formal opening, and already half an hour late, his quiet evening plans were gradually disappearing, drink by drink.

One of the journalists was talking about the last club opening he’d been to, something about a fire alarm and how they’d all ended up in the… Christopher’s attention drifted from the man’s story to a gentlemen who skipped and floated across the dance floor. Nothing too unusual so far, but the fact that he was wearing only a pair of tight gold trunks with glitter over his athletic hairless chest made Christopher sit up, his shorts tighten, and his stomach flutter.

The man shouted, “Me cago en tu puta madre!” and turned to face Christopher, staring for what seemed like a minute, smiling and not breaking eye contact.

Christopher couldn’t take his eyes off this exotic passionate creature, staring so intensely and deeply it felt as if he were staring into his soul. He knew that no man dressing like that would take himself too seriously. He felt sure that a man like that would humour his partner, was comfortable with himself fully without censoring, wouldn’t mock every decision of other people like… Christopher stopped that particular avenue of memories.

Then, as suddenly as he’d arrived, the man shook his head, clapped twice, and ran through a door to the side of the stage.

That arse in those trunks was at least a nine, possibly a ten. Who is he? What’s the English equivalent to that sweary Spanish phrase? Where is he going? And why aren’t I talking to him instead of this group of idiots? 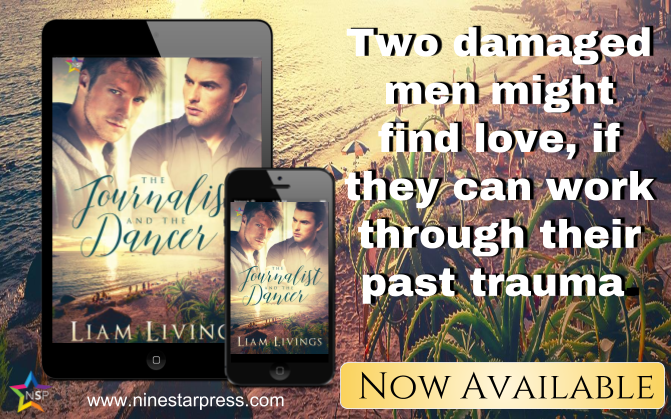 Liam Livings lives where east London ends and becomes Essex. He shares his house with his boyfriend and cat. He enjoys baking, cooking, classic cars and socializing with friends. He has a sweet tooth for food and entertainment: loving to escape from real life with a romantic book; enjoying a good cry at a sad, funny and camp film; and listening to musical cheesy pop from the eighties to now. He tirelessly watches an awful lot of Gilmore Girls in the name of writing ‘research’.

Published since 2013 by a variety of British and American presses, his gay romance and gay fiction focuses on friendships, British humour, romance with plenty of sparkle. He’s a member of the Romantic Novelists’ Association, and the Chartered Institute of Marketing. With a masters in creative writing from Kingston University, he teaches writing workshops with his partner in sarcasm and humour, Virginia Heath as http://www.realpeoplewritebooks.com and has also ghost written a client’s 5 Star reviewed autobiography.